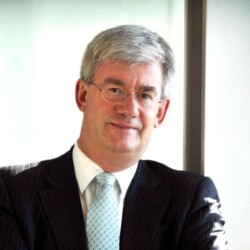 Saul Eslake worked as an economist in Australia’s financial markets for more than 25 years, including as Chief Economist at McIntosh Securities in the late 1980s, National Mutual Funds Management in the early 1990s, ANZ Banking Group (1995-2009), and Bank of America Merrill Lynch (2011-2015). From 2009 to 2011, he was Director of the Productivity Growth program at the newly-established Grattan Institute. In 2015, Saul started his own economics consultancy business, taking up a part-time position as a Vice-Chancellor’s Fellow at the University of Tasmania from 2016. He is currently a member of the Australian Parliamentary Budget Office’s Advisory Panel; the Australian Taxation Office’s ‘Tax Gap’ Advisory Panel; and is on the Advisory Board of Jamieson Coote Bonds. He chairs the CSIRO’s Decadal Climate Forecasting Advisory Board, is a non-executive director of the Macquarie Point Development Corporation and was previously on the Board of Hydro Tasmania (2008-2018). Saul has a first-class honours degree in Economics from the University of Tasmania, a Graduate Diploma in Applied Finance and Investment from the Securities Institute of Australia, and in 2012, he was awarded an Honorary LLD degree by the University of Tasmania. He has also completed the Senior Executive Program at Columbia University’s Graduate School of Business in New York.