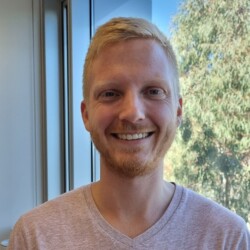 Ross will be speaking in Session 9. Fresh Science B. Click here to see more.

Methoxypyrazines (MPs) are compounds that can impart varietal aroma attributes to red wine, but at concentrations in excess of 15 ng/L, notes of “herbaceous”, “leafy”, and “green” may predominate. The most prevalent MP in grape and wine is 3-isobutyl-2-methoxypyrazine (IBMP), which has been described as having a “green capsicum” character. Recent research has shown that the concentration of MPs in the rachis of Cabernet Sauvignon and Shiraz is orders of magnitude greater than in the berry and can be significantly influenced by rootstock.

MPs are difficult to remove from must or wine with current remediation techniques and are therefore ideally regulated in the vineyard, and/or by excluding rachis material from fermentation. However, it remains unknown whether the concentration of IBMP in different parts of rachis (e.g., top, bottom, peduncle, pedicel) is equal and whether this phenomenon is mediated by rootstock or Vitis vinifera scion variety.

This work investigated the distribution of MPs across the rachis of Shiraz and Cabernet Sauvignon bunches grown on common rootstocks in Coonawarra and Barossa Valley. MP concentrations in different segments of the rachis were found to vary significantly, with variability between segments becoming more pronounced as grapes matured. Furthermore, there were significant differences in MP concentrations between different scion and rootstock varieties. These findings will aid winemakers in producing high quality wine by providing an understanding of the impact of different rachis components on the concentration of MPs and how rachis inclusion in fermentation could potentially influence wine flavour.

Ross obtained an Honours Degree of Bachelor of Science in 2016 from the University of Adelaide, after which he was employed by SA Water (Technical Officer). During his time at SA Water, Ross was involved in the detection of protozoa and bacteria in water samples. Ross left SA Water in 2017 and began employment with the University of Adelaide (UoA) as a Research Assistant, working on a project with the Australian Wine Research Institute (AWRI). Ross was involved in the development and optimisation of a multi-step synthetic method for the production of isotopically labelled glutathione, a naturally occurring polypeptide, from molecular sulfur. In February of 2019 Ross started his PhD at the University of Adelaide in conjunction with CSIRO, with Wynns Coonawarra Estate as the industry partner. Ross’ PhD involves an investigation of the effect of rootstock on grape rachis composition, specifically in relation to methoxypyrazines. This incorporates a variety of field trials along with high-performance liquid chromatography tandem mass spectrometry (HPLC-MS/MS) and gas chromatography tandem mass spectrometry (GC-MS/MS) for the quantification of analytes in grape.