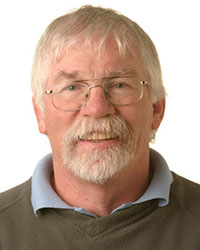 Dr Paul Cooper undertook his PhD at the University of California, Los Angeles studying water balance in desert beetles. He came to Australia on a postdoctoral research fellowship at La Trobe University before being appointed as a contract lecturer at the Australian National University in 1987. Paul has lectured on a variety of topics, mostly within the invertebrate and physiological areas. He began working with grapevine pests with the biology of phylloxera, along with Kin Andrews (PhD student) and Kevin Powell, looking at questions of how phylloxera feeds and reproduces. He then switched to scale insects with another student (Nelson Simbiken) and has been investigating how scale insects and cultivars of grapevines vary in their interactions in the ACT/NSW region. During this time, Paul began working with Lian Jaensch and Jenny Venus from Langhorne Creek, South Australia, examining the spread of scale insects in regional vineyards. He has been the editor-in-chief for the Australian Journal of Zoology for nine years. Paul will address Climate change and its influence on scale insects and sooty mould occurrence in Session 5. Fresh Science A on Tuesday.